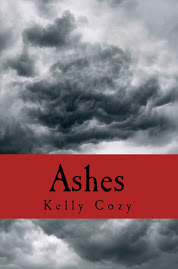 I've recently read ASHES by Kelly Cozy, and the first chapter had me hooked. The opening sentences began innocently enough - the author described a typical day - but wow! Things started happening right away.

Book Beginnings on Friday - Opening sentences:
Downtown Los Angeles glittered in the sun, seemed to preen. The city knew its best light - a spring morning, the sky cleansed of smog by the past weekend's rain - and its best angle - from a distance.

Friday 56 (from 56% on my Kindle):
I live in a small town in British Columbia, where I'm an assistant librarian. I putter around with books and have tea with my boss and we talk about what we're reading. I have a cross-eyed cat and a tiny house with fish painted on the bathroom walls and a bedroom done in early San Francisco Whorehouse. I tutor a fisherman's son.

Here's the synopsis from Goodreads:

Anonymous. That was Jennifer’s life. But when she survived a domestic terrorist attack and her last-minute escape became the iconic image of the event, that life was over. Wanting only to disappear and become just another face in the crowd, she cashed in on her unwanted fame and moved to a small town, hidden away and safe.
Retired. That was Sean’s life. A former covert operative – the kind the government denies exists – he’d been pushed unwillingly into a life of suburban peace and quiet. But his retirement ended when he saw Jennifer’s rescue; from then on he only wanted to find those responsible for the attack, even if it meant turning rogue.
What Jennifer and Sean will both find is that nothing goes to plan, and their paths will cross in a way neither could have foreseen.

Anyone can participate in Book Beginnings and Friday 56.

I've just finished reading THE BEACH TREES by Karen White and enjoyed it so much that I've added her other books to my wish list. Not only did I like the plot, I came away with a better understanding of the outlook and attitudes of people who live in disaster prone areas. Seems to me that no matter where we live, Mother Nature has surprises in store for us!

Book Beginnings on Friday - Opening sentences:
Death and loss, they plague you. So do memories. Like the Mississippi's incessant slap against the levees, they creep up with deceptive sweetness before grabbing your heart and pulling it under.

Friday 56 (from Page 56 of my paperback copy):
Aimee regarded me with a steady blue gaze. "Why build skyscrapers in San Francisco that might be knocked down by an earthquake? Or why build farms in Kansas and Oklahoma that might get blown away by a tornado?"

Here's the synopsis from Goodreads:
From the time she was twelve, Julie Holt knew what a random tragedy can do to a family. At that tender age, her little sister disappeared - never to be found. It was a loss that slowly eroded the family bonds she once relied on. As an adult with a prestigious job in the arts, Julie meets a struggling artist who reminds her so much of her sister, she can't help feeling protective. It is a friendship that begins a long and painful process of healing for Julie, leading her to a house on the Gulf Coast, ravaged by hurricane Katrina, and to stories of family that take her deep into the past.


Anyone can participate in Book Beginnings and Friday 56.