Another Sunday, another six sentences! Again, we're taking our six from I.O.U. SEX, the story of three women who track down their high school boyfriends to give them the sex they never allowed years before. In this scene, Kiki has rendezvoused with her old boyfriend Greg (who's now a televangelist), but things aren't going exactly as she'd envisioned.

Kiki crawled onto the bed like a tigress stalking its prey, leaned against Greg, and slid her hand up his thigh. "First let's see what you've got," she growled. She felt Greg stiffen. When her hand reached higher, she realized the stiffness was in his spine and not where she'd hoped.
Greg grasped Kiki's shoulders, then her hands, and shoved her onto her back, pinning her arms over her head. "Submit," he hissed. 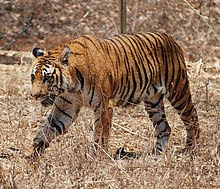 
Photo source: Wikipedia
Posted by Sandra Nachlinger at 1:00 AM